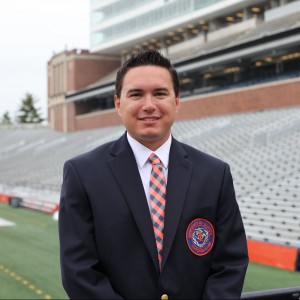 A native of Illinois, Sean Smith is currently a candidate for the Master of Music in Wind Band Conducting and serves as a graduate teaching assistant with the University of Illinois Bands.

Sean completed a year of coursework at Ithaca College in Ithaca, New York prior to coming to the University of Illinois. He has six years of public school teaching experience as Director of Bands in the Conneaut Area City Schools in Conneaut, Ohio. While in Conneaut, Sean taught bands from fifth grade through high school, directed the Conneaut High School Marching Band, and developed the music technology, guitar, and piano courses offered by the high school.

Before teaching, Sean studied at Baldwin Wallace University Conservatory of Music in Berea, Ohio, where he received a Bachelor of Music Education. Sean received much conducting experience at Baldwin Wallace as Conducting Apprentice for the Symphony Orchestra and Symphonic Wind Ensemble and student conductor for the Brass Choir and the Contemporary Ensemble. Sean’s professional experiences include serving as Music Director of the Euclid Civic Orchestra and working as a National Director for Bugles Across America.

In August of 2015, The Instrumentalist Magazine published an article Sean authored titled “The Ideal Marching Schedule.” He had previously presented on the topic at the Ohio Music Education State Conference and at the Whalen Symposium at Ithaca College.