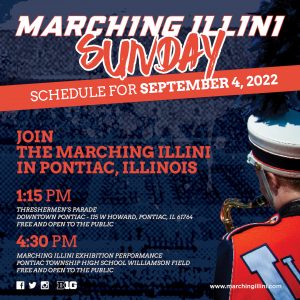 Marching Illini in the 2022 Threshermen’s Parade

This year’s Threshermen’s Parade will step off on Sunday, September 4th at 1:15 pm. The theme is “Full Steam Ahead;” this year’s grand marshal is Oscar Gorbet, Livingston County MDA coordinator and this year’s featured entertainment is the Marching Illini!
NEW! in 2022 the Threshermen’s Parade will feature The University of Illinois Fighting Illini Marching Band. Under the direction of Barry Houser, the Marching Illini are “the nation’s premier college marching band.” They are known for their excellence of innovation in pursuit of the highest levels of musical, visual, and thoroughly entertaining performances. The Marching Illini will march in the parade and afterwards at approximately 4:30PM will put on a special halftime show at the Pontiac Township High School Williamson Field. Both the parade and the performance are free to attend, you won’t want to miss out! All of your old favorites will be in the show as well including local marching bands, antique steam engines, tractors of all types, Shriners, and floats of all types from community organizations.
The parade will step off at 1:15PM on Sunday, September 4 and head north on Mill Street. It will turn east on Madison Street and north on Main street, continuing north until the end of the route. Please note that these streets will be closed to traffic during this time. The grandstands with announcers will be located at the intersection of Mill and Washington Streets.
The Pontiac Area Chamber of Commerce has been the lead coordinator for the Threshermen’s Parade in downtown Pontiac since the mid-1950s and are happy to be a part of this continuing tradition. The Marching Illini are brought here by a generous donation from the Byrne Trust, the Humiston Trust, and the City of Pontiac and the coordination of the PTHS Fine Arts Department.